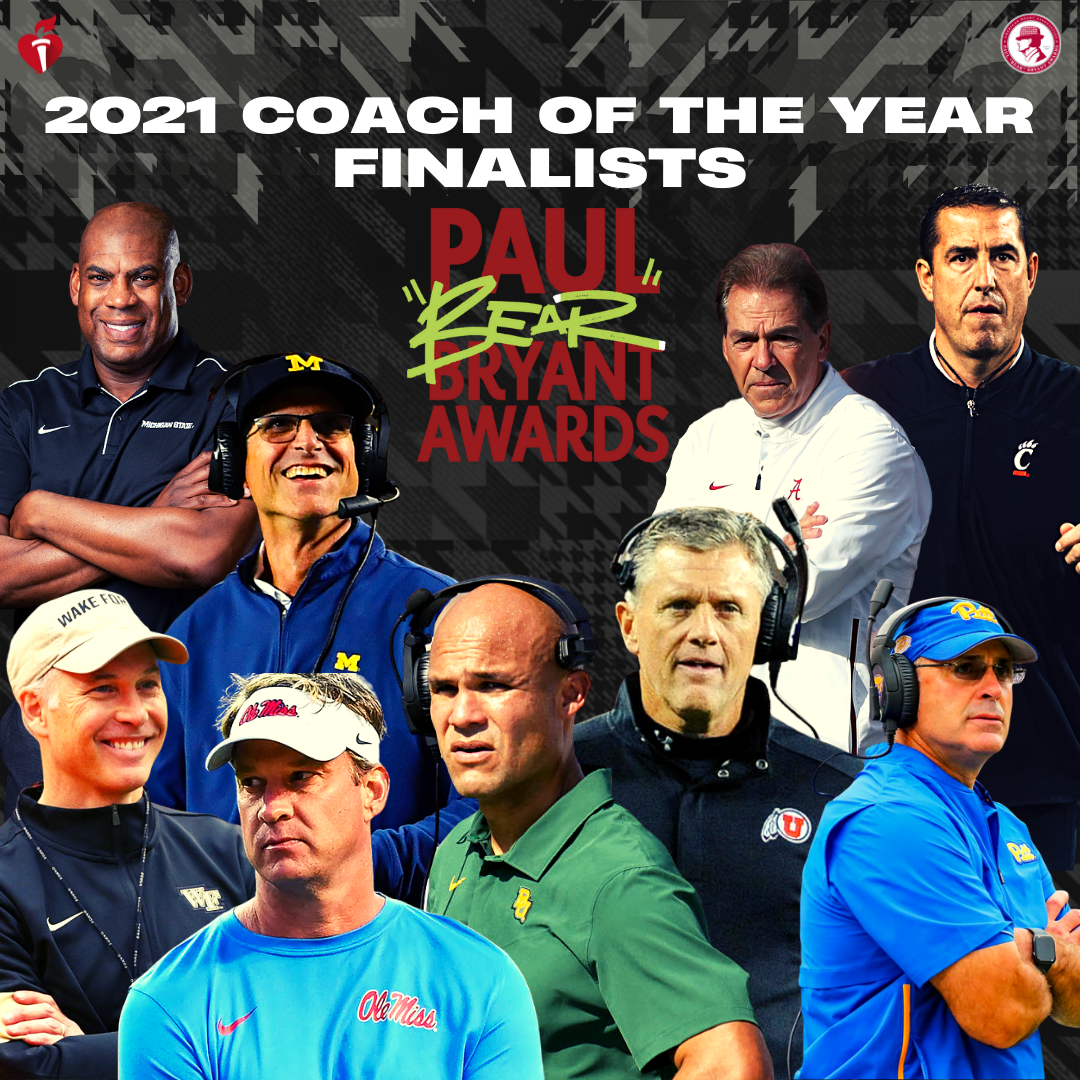 (NewMediaWire) – December 14, 2021 – HOUSTON – Nine college football coaches are finalists for the American Heart Association’s 2021 Paul “Bear” Bryant Coach of the Year Award. The Paul “Bear” Bryant Award annually recognizes the country’s top college football coaches for their contributions both on and off the field, making the sport better for athletes and fans alike by demonstrating grit, integrity and a winning approach to coaching and life. The award is the only college coaching honor selected after all postseason bowl games and the National Championship have been played. The Coach of the Year award is voted on by the National Sports Media Association, current NCAA College football coaches, former Coach of the Year Award winners, the Bryant Awards’ Executive Leadership Team and the Bryant family.

The 2021 Conference Coaches of the Year awardees are (in alphabetical order by finalist last name):

The 2021 Coach of the Year finalists are (in alphabetical order by finalist last name):

University of Alabama football coaching legend, Paul “Bear” Bryant, died from a heart attack in 1983. Moved to drive education around heart disease after his passing, the Bryant family teamed up with the American Heart Association in 1986 building on the Association’s Coach of the Year Award to create the Paul “Bear” Bryant Awards program. Each year, the awards honor “Bear’s” legacy by recognizing coaching excellence while raising critical funds to support the mission of the American Heart Association through event sponsorships, an auction and individual charitable donations.

The Coach of the Year will be announced at a gala event on Wednesday, January 12, 2022, from Houston and broadcast live by Bally Sports Southwest sports channel, with proceeds benefiting the American Heart Association, the world’s leading voluntary health organization devoted to a world of longer, healthier lives. After the event, the awards will be televised nationwide on Bally Sports’ family of networks.

Mel Edwards, Senior Vice President and Executive Director of American Heart Association’s Houston Division said, “We are excited to name this list of finalists for the American Heart Association’s Paul ‘Bear’ Bryant Awards. These coaches have set a high bar and embody all the characteristics that the great ‘Bear’ held in high esteem such as integrity, perseverance, and grit. We wish them the best in the remainder of the season and cannot wait to see them in Houston on January 12.”

Marathon Oil Corporation, an independent exploration and production company based in Houston, has served as the presenting sponsor of the Paul “Bear” Bryant Awards for more than a decade, underscoring the company’s commitment to health and wellness and supporting initiatives that promote the well-being of workers and their families in the communities where they operate.

“This list of phenomenal coaches are all leaders on and off the field, and we welcome them to this elite group,” said Lee Tillman, Marathon Oil Chairman, President and CEO. “We’re honored, along with the Bryant family, to support the lifesaving mission of the American Heart Association while carrying on Coach Bryant’s legacy.”

Fans can follow Paul “Bear” Bryant Award finalists, track progress of the awards and be among the first to know who is named Coach of the Year at facebook.com/bryantawards or twitter.com/bryantawards. To attend the exclusive VIP experience for the Bryant Awards, contact 832-918-4009 or visit bryantawards.org.