(NewMediaWire) – March 2, 2022 – PickleJar, the live entertainment and artist payments app, announces today that they will proudly present the “Revolutionary Women of Music” leading up to the ACM Awards in Las Vegas. Spearheaded and hosted by PickleJar’s Kelly Ford and produced by Sharla McCoy, the acoustic showcase will amplify women’s voices in music and highlight these artists’ extraordinary talent. Participants include Lindsay Ell, Ruthie Collins, Erin Kinsey, and Kristy O of American Young. This event will take place at Robert Irvine’s Public House in the Tropicana on Saturday, March 5 at 6:00pm. 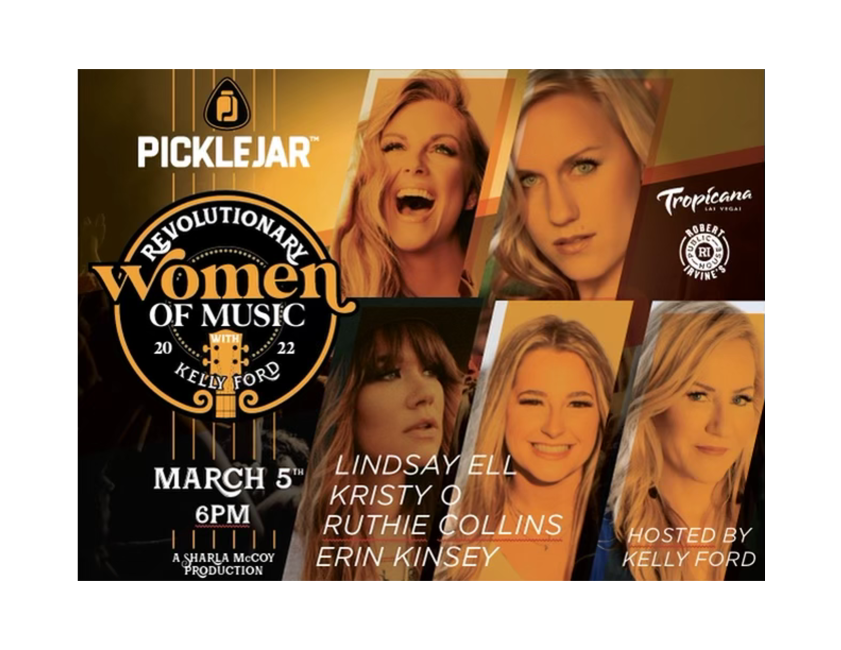 “I am always looking for ways to share and celebrate the stories of people who find their voice and lead the way for others to do the same,” said Kelly Ford. “PickleJar’s dedication to all artists, especially women, is unmatched so when we discussed plans for ACM Awards week, I knew just the women to call who are shining examples of grit and grace for this inaugural event.”

There is no cover charge for entry and PickleJar will donate $1k to each of the “Revolutionary Women of Music” artists’ preferred charities.

This is just another step in PickleJar’s dedication to putting #ArtistsFirst. The founding team behind PickleJar, CEO Jeff James and President Kristian Barowksy, shared their innovative vision when they were recently featured in the latest issue of MusicRow Magazine. The two-page story highlights “the world’s biggest tip jar” and PickleJar’s plans for the future.

Founded on the idea that artists should have full control over the profitability of their creative talents, PickleJar is a suite of Artist-First technologies developed with a simple idea – “help others achieve the greatest value for their creative talents and visionary pursuits.” PickleJar’s gaming-inspired features give fans instant access to the performer through private direct messages and picture sharing – earning them loyalty rewards, achievement badges and exclusive giveaways. Most importantly, artists receive 100% of funds sent by fans through the PickleJar platform. See PickleJar.com for more information.

PickleJar is the intelligent live entertainment app for simple, safe, and secure payments between artists and their fans. It’s a suite of free, #ArtistFirst technologies where song requests and buying concert tickets feels rewarding, and where instant gratification lights up every stage and streaming performance. Leveraging the deep fintech and music industry expertise of the leadership team, PickleJar launched the first social payments platform to help musicians, content creators, and artists maximize their financial freedom.

PickleJar started with a simple vision – Artists get 100%. Two years later, the app has expanded the peer-to-peer tipping payments technology and proprietary performance management tools to include partnership programs with venues, broadcasters, and non-profits. PickleJar makes it frictionless for the growing community of artists and content creators to make, manage, and move money in the new Gratitude Economy. Learn more about the “World’s Biggest Tip Jar”℠ at PickleJar.com.

Country Music Industry Veteran Producer, Sharla McCoy, is the owner and operator of Nashville based McCoy Productions and is an intricate advocate working with country radio, artists, record labels and management teams. McCoy is the creator and executive producer of the ever popular “Sharla McCoy Music Row Live” (Nashville) and “NashVegas Live! “(Las Vegas) annual radio broadcast events which have been running collectively for over 30 years and where McCoy’s company slogan “Where Artistry Meets AirWaves” could not ring truer.

McCoy says, “I love Country Music, the artists, country radio and the people in our industry and feel so blessed and privileged to have the opportunity to do what I love – it’s not a job…it’s my heart.”

McCoy is also the longest running producer for satellite radio tours which she is unquestionably passionate about doing.  McCoy is the creator, writer and producer of the well-received annual national holiday radio special “THE GIFT” which can be heard across this great nation on Memorial Day and Christmas hosted by superstars like Brad Paisley, Garth Brooks, Craig Morgan to name a few. The radio special creates awareness about FisherHouse.org and their work providing non-cost housing for our military and veterans families, because A Family’s Love Is the Best Medicine.